Interview of the creator Jason Leaver 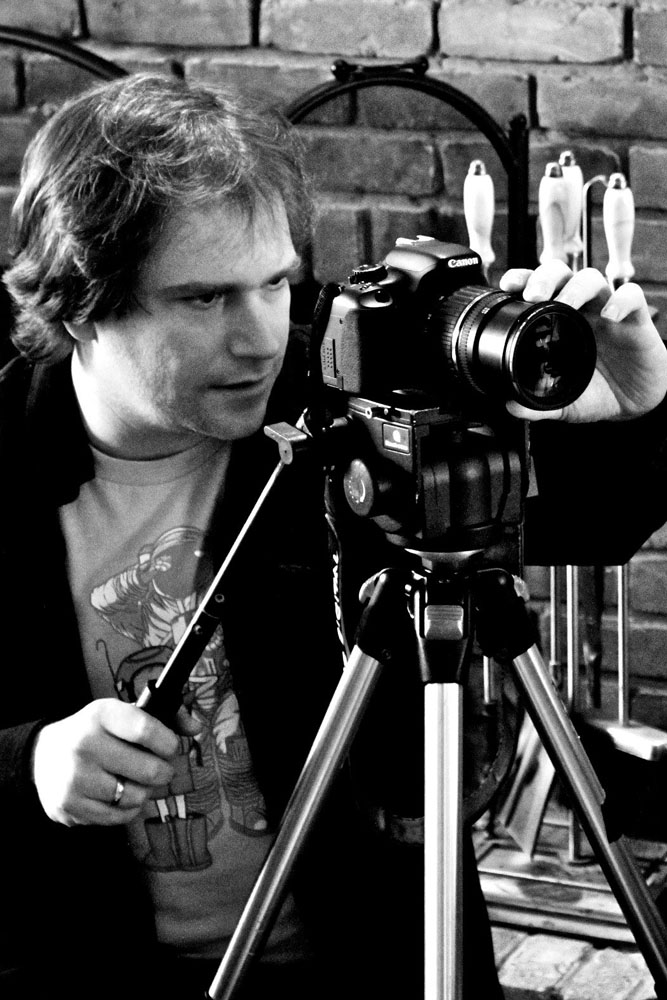 What can you tell us about you, your career and your previous projects?

There was a moment when I was in high school, sitting in class, learning about video production that it occurred to me “you can do this for a living?”.  It was a great moment.  I knew exactly what I wanted to do with my life.

I went to Ryerson University’s School of Images Arts, film studies option.  Throughout my schooling I produced corporate videos as a way to pay my tuition, and I’ve never stopped.  These are the videos that are typically shown internally for businesses for training purposes, to introduce new products or ideas, to boost morale.  They’re lots of fun to make.  Typically these videos are very dry and boring – so try to spice them up as much as possible.  I want to make corporate videos that are actually fun to watch.

When I’m not doing corporate work I make short films whenever I can.  And last year I participated in Nuit Blanche, the all-night arts festival in Toronto (inspired by the original Nuit Blanche in Paris).  I created a film about time-travel that was infinitely long, because it would loop back on itself and start over.  The looping film was shown on four screens each delayed 25% from the one beside it.  The screens would interact with one and other.  It was also the first time I got to work with Will Conlon as an actor.  We both knew then it was the beginning of something very special.

How would you introduce Out With Dad ? (What’s the series about, how did you come up with the idea…)? Could you explain the title and why you’ve chosen it?

It’s about a teenage girl and her single father.  She’s coming of age and coming out of the closet.  Her dad is aware something is troubling Rose and wants to help, but isn’t sure how to get involved.  As for the title, I’m a fan of puns, which may not translate well into other languages… which never occurred to me until now!  “Out With Dad” plays on the expression like “I’m going out with Dad”, just like if they went to dinner or went shopping together.  Simply hanging out.  But also the idea that she’s coming out of the closet with her father.  Of course season one is over…. and she’s not actually “out” yet with her dad… we’ll have to stay tuned.

Dealing with homosexuality during the adolescence is a subject that’s often been explored. However, a parent wanting to let his child know that he’ll be there no matter what, that’s a new perspective. Why did you choose those two aspects?

The idea came to me when thinking about what it would be like to have a daughter.  I imagined all the things a daughter might have to go through and if I was her dad, how would I react.  Like the first crush, a fight with a best friend, her first period.  What if she came out?   I’m sure you know how I’d respond to her coming out: with love and care.  And excitement too, she’s discovering who she is and that she’s sharing herself with me.  But what about the challenges with being an openly gay teenager?  I don’t want any of that for her.  I want life to be a breeze.  What if she wanted to bring her girlfriend to the prom and she wasn’t allowed?  (I was thinking about this several months before Constance McMillen of Mississippi, USA hit the news)  If that happened to my little girl I’d raise hell!  I’d be off to the courts, I’d be at the front door of the news stations, I’d be writing letters to politicians, I’d yell at the principals and the school board.   As I daydreamed my heroism it occurred to me that my daughter might not appreciate all that attention.  Would she rather ignore the problem and let it fade away?  It was this story that made me think “this would make an excellent web series”.  I started researching and writing scenarios.  Funny thing is, I dropped the prom idea because I (wrongfully) believed this issue is resolved and it would never happen again.  Go figure.  Several weeks later I read about Constance.

I don’t know if this answers your question – why the two perspectives?  I guess it’s because I thought about this story first from my perspective.  Both sides of the story seem interesting to me.  Neither of them are something I’ve been through, and I wanted explore it.

Are you a dad yourself? Is it part autobiographical?

I’ll admit, there’s a lot of me in all the characters, including Nathan.  We both love making and drinking tea; going to the movies and analysing them; and of course our attitude about homosexuality.  But no, I’m not a father.  Writing the fatherly parts has been difficult for me, having no real experience.

I think Rose is more autobiographical.  I was in love with my best friend in high school, and she didn’t love me the same way – it was painful.  The “Party Out” episode was very autobiographical.  I loved those parties, they always had those colourful lights.  I never wanted to dance but was always forced to.  Another thing Rose and I share is we both have friend of a different gender that everyone assumed we were dating, even though we were just friends.  We both get really annoyed when people think we’re dating.  Generally I’m not shy – but when it comes to the topic of love and dating: I was very shy.  I rarely talked about it with my parents, even though we spoke about everything else.  The relationship Rose has with her dad is very much like the one I have with my parents.  It’s very loving and very close.  My parents are my best friends.

How did you cast the actors and the crew?

Casting was done very traditionally.  I posted a notice on a casting website and get tons of submissions from actors.  From there I choose the people I wanted see in person.  Funny story, I almost didn’t invite Kate to come because she looked too old in her photo!  Just as I was about to drop her photo and resume in the “No” pile, someone told not to… “just bring her in”.  I’m glad I did!!

I had every actress that came to audition try out for both Rose and Vanessa’s roles.  We did the scene of Rose and Vanessa in the cafe in episode 2.  I asked each actress who they wanted to be first.  Almost everyone chose Rose, except Lindsey – she chose Vanessa!

For the dad, there were fewer actors to choose from.  We only saw six actors for Nathan.  They were all very good actors.  Two of them weren’t right for Nathan, but I have other roles in mid for them.  The scene they read from is actually in season two – so I can’t tell you about that!

Watched the footage of our favourite Roses and Vanessas.  We all knew Kate was the right person to play Rose.  She captured mine and everyone’s hearts.  I met for coffee about a week later so I could get to know her a little more, and sure enough we got along very well. I offered her the part on the spot.

I asked Kate to help me with the call-backs for the part of her Dad and her best friend.  We invited four Nathans and six Vanessas to come back.  Only two Nathans showed up that day, both were very good.  But Kate really connected with Will.  I think I knew Will was the one the moment they did that handshake that you see in episode seven.  They really clicked.  I asked Kate who she’d prefer to play her dad, and she chose Will.  For the Vanessas, we had some great choices.  When we learned that Lindsey was in the first year of the same theatre program Kate just graduated from they really connected.  They had an instant history with each other.  Again, when asked, Kate choose Lindsey.

The crew are all people I’ve met along the way.  Mostly they are friend or friends of friends.  Few of them knew each other before we started.  But I tell you, we sure know each other now!  We’ve all become such good friends.  We’ve become quite the family and love working together.  All of us can’t wait to film more!

How did you find the funding?

We didn’t find any funding!  I’m not very good at looking for it.  This season was funded from my own pocket.  Everyone that worked on the project volunteered their time.  Everyone!  Including the whole cast.  All the crew members.  All the musicians who performed the score.  All the music was donated by the bands.  All the equipment is my own, from my business.  The greatest cost was time.  Everyone sacrificed a lot of time and energy.  I am so grateful.  Moving forward we need to find funding, because there are costs ahead of us.  Right now we’re asking fans to help by donating a few bucks here and there.  We’ve had people all over the world help us already.

How long does it take to shoot an episode? And how long for preproduction?

It takes very little time to shoot an episode.  Depending on the complexity of the scene it might take a few hours or a whole night.  In episode 3 the subway scene took several hours to film, but the movie theatre scene took an entire night (from 11PM to 6AM!).  But before we shoot, we have to write, cast, plan, find locations… it takes weeks or months to prepare.  And then after comes the editing, special effects, colour correction, scoring, mixing.  That too can take many weeks.  Although if rushed, it could take only a few days.  The entire episode 4 “Party Out” had 3 days to do post-production.  Whereas Nathan’s date scene I edited in a few hours, and then tinkered with it for months afterwards.

You’re the creator, scriptwriter, director and producer. How do you manage to deal with all those roles at the same time?

I’m actually a lot more than that!  I’m also the cinematographer and camera operator, the editor, I do all the visual effects (except for the 3D animation in episode seven, by my brother-in-law Topher Turner) and the colour correction, the graphic design, I even maintain our website.  It’s very difficult to manage all these roles.  Plus I run my own business – lately I’ve been wearing myself out.  But I this is a labour of love.  I really love this show.  It never feels like ‘work’.  I love all the different jobs I do too.  In the future I might work with a cinematographer, or a lighting director.  But I don’t think I’d ever let go of editing: that’s my favourite part.

Mots-clés : Jason Leaver Out With Dad