How did you get involved in this webseries?

Ellen : Otessa Ghadar (the Series Creator of Orange Juice in Bishop’s Garden) actually came to my school Duke Ellington School of the Arts in hopes to recruit cast members for the up and coming web series. I read for Maggie, Yasmine, and Sarah at the first audition. I had no idea that when the second audition came around that I would be offered the role of Sarah Roberts, I was so excited!

Katie : I came across an audition notice for Orange Juice on a casting website, and clicked on the link even though the audition date had already passed…I loved the series and how professionally set up the website was, contacted Otessa about auditioning, and (surprisingly) she let me come in and read.  One interesting thing about the audition was that I came in with black hair, and I later got to dye it blonde for the role of Gwen, which I like doing to help me really get into a new character.

Have you always dreamt of being an actress?  Can you tell us about your career, your previous projects, etc.?

Ellen : Ever since I was young, I was never satisfied with the constraints of reality, my imagination took me to the places I dreamt of. Whether it was creating forts in the woods behind my house, or simply “playing pretend”, developing characters was something I started from a young age. Acting was the next logical step to continue feeding my imagination, so being in the theatre department at Duke Ellington really helped with that. I hope to pursue film, theatre, and music at Sarah Lawrence next year in New York.

Katie : My family still jokes about me jumping up on fireplace hearths during family get-togethers and belting out songs, reciting poems, the alphabet, “Frère Jacques” at the age of two and three. I was always interested in taking acting classes, singing and dance, pored through “The Washington Post” for audition notices every week, and booked my first professional production as the lead in a play at The Kennedy Center when I was twelve years old.  Since then I’ve acted in plays and films (including “Syriana”) in Los Angeles, London, Sweden, New York, and of course my beautiful hometown DC.

Ellen :  I like that Sarah has grown into a person who is comfortable with herself. Over the seasons she has learned to stand her ground. With that, however, she can be jealous and impulsive, something I don’t like so much.

Katie : I like Gwen’s forthright confidence, and I too like how comfortable she is with herself. I think one of the things I like less in this season is how sometimes she seems a little needy of Sarah – I think sometimes that happens with outgoing, confident people…Gwen’s very giving, and perhaps that’s taken advantage of by her peers.

What do you have in common with your character? Or not in common?

Ellen : Both Sarah and I are very involved in the arts. When I originally started to do character work for her, she wanted to be a photojournalist, she was very involved in writing, reading, and photography. As years went on, my life as Ellen Winter fed into Sarah Roberts when she became a musician.

Katie : Oh Gwen and I?  Well, Gwen is awesome and I, well, I’m not awesome. So no, we don’t have anything in common.

No – I’d like to think I’m a confident, outgoing individual, and perhaps we’re alike in terms of giving a lot of ourselves when we find the right person – perhaps sometimes too much.

Did you know from the beginning that your characters would develop a lesbian relationship, that Sarah and Gwen were about to be in love?

Ellen :  Well, because I had received the whole script, I was able to see the arc of the season so I knew that they would be together. I did not know though how deep their relationship would become. During season 3, we really get a look into the healthy loving relationship between Gwen and Sarah, it was a joy to film.

Katie : I think from the first reading at the audition…you know I don’t remember if I knew that she would be gay, or that she would develop such a solid, longterm relationship with Sarah. I liked that Gwen was the mysterious new girl for Sarah, and I hoped to take that in stride when playing her, no matter what her sexual preferences. 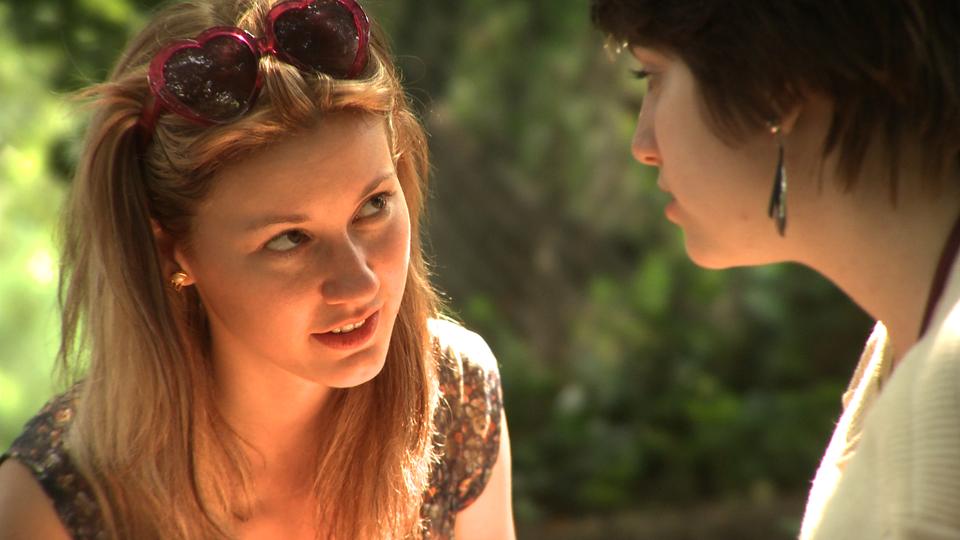