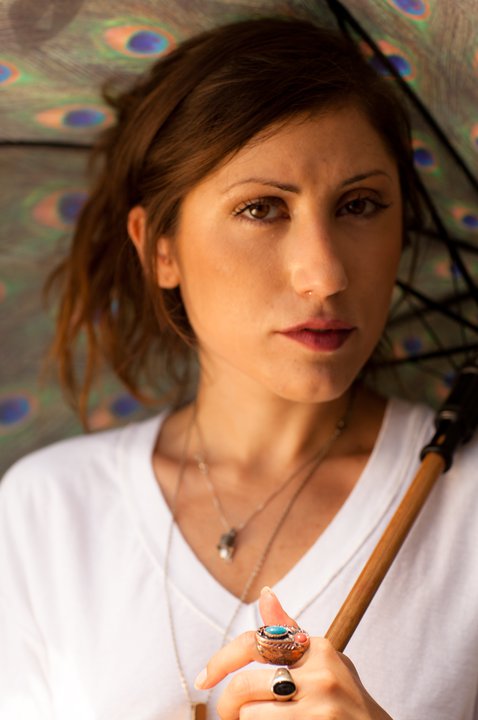 What can you tell us about you, your career and your previous projects ?

I’ve always been interested film and production. Then, in college at Columbia University in NYC, when I discovered this was an area you could actually study and major in—I dove right in. This was much to the chagrin of my advisor and my parents, who were infinitely wary that I was turning my back on my, perhaps, overly-sensible Theoreticial Physics/Math degree, to throw my life away for film. Oh, the drama of it all. Pun intended. They’ve come around since then though! Orange Juice in Bishop’s Garden actually started as my thesis project in Graduate School at Columbia University.

In particular, I was (and am) enthralled by New Media–specifically web series.  New Media is like the Wild West of filmmaking and, in my opinion, a great migration to a new frontier… one that many at my film school weren’t interested in packing their bourgeois bags for — which is understandable but I was ready and willing to put my Clint Eastwood face on. I’m still amazed and immensely grateful that the show was able to spread and grow from those humble beginnings.  We’ve recently wrapped up filming season 3 of OJBG. Next summer we’ll be moving on to Season 4. It’s all too good to be true and the team I work with is absolutely inspiring. Sometimes I feel like I have to pinch myself.

Let’s see… other projects. Okay, I won’t say too much but I’m a bit of a Sci-Fi nerd and this will soon materialize into another web series. I am very excited to start this 2nd web series!

Amongst the other odd jobs I’ve had over the years, DJ-ing is one that I miss terribly and enjoyed doing for oh, 10 years in New York. I actually sold half my record collection to fund the Orange Juice in Bishop’s Garden’s beginnings.

Were did this webseries’ idea come from and also why is the series setting in 1994 in Washington DC ? Do you think you could have chosen another location or another time ?

I grew up in Washington, DC in the ’90s and it’s really inspired my work. I considered my 10 years in New York a hiatus from my torrid love affair with the nation’s capital.  DC in the 90’s was really an incredible time and place to grow up– and I wanted to reach into that– and then extend it back out to current teenagers, and also to those of us who were teens in the ’90s. That, and my love of New Media & coming-of-age stories gave birth to Orange Juice in Bishop’s Garden.

The show is essentially based on my experiences while being a teenager. (Because what 20-something doesn’t want to look back and reminisce about all the horrible mistakes and lessons learned?) I wanted to show a valid representation of teens in the ’90s – and teen life in general– the dirty-happy-sad version (and not the “Jimmy Choos and Fendi bag” version one sees so often on American TV these days, which I find difficult to relate to) … and the way I knew to do that was to place the series in an area and era I knew and loved. Plus, I feel as though the ’90s is seen (and forgotten) as the illegitimate child of the 20th century and, though it may have been a tad misbegotten, it did a lot of things right.

As well, I have an overwhelming sense of nostalgia for the grunge-era. You’ll notice those pristine, blue, knee-high Doc Martens featured in the show: “Obsessively Cared for Since 1994” and stored museum-style. I’m such a pack-rat but it has paid off since I could basically dress half of the cast in my closet’s dusty treasures. (Okay, nothing’s dusty–I actually still wear most of my ’90s garb… sensibly.)

Why do you write on the adolescence’s subject ?

I think growing up is fraught with difficulty, and there were shows (like “My So-Called Life”) that really spoke to me at that age– shows that made you feel less alone.  I wanted to try to do the same for today’s teens… speak to them in a way that was meaningful, without pandering to them, and without talking down to them or being condescending– and, hopefully, to make someone else feel less alone…laugh even.

Then that night, they all go to Bishop’s Garden: a place which was and still is a major teen-hangout spot in DC.  They manage to finagle some liquor, but their crew is young and inexperienced with drinking– so none of them can handle the liquor.  Things go completely out of control and stupidly so. Simply put: everything goes awry…and then the cops come, whom they manage to escape.

As Sarah and Kris walk home… Kris says how the night was such a disaster and she wishes “the cops would come”.  To which Sarah replies, “I wish we were just drinking orange juice” (instead of malt liquor).

And I think, at the end of the day, that’s what the show is about:  in a world of expectations, of taking everything to the next level, of teen shenanigans… it can feel empty and sometimes you just wish you were drinking orange juice with your best friend.

I remember having that feeling a lot as a teenager.  And I wanted to tap into that.

In your opinion, what are the restrains and benefits of the webseries’ size ?

New media is your playground. This is one of the reasons it wooed me. It’s so open-ended, full of creative breathing room. Aside from the episodes themselves, the website is pretty inter-active. There are blog posts by the characters and pages for each of them (almost like a ’90s proto-version of Facebook), where the characters can build on the stories we catch on film and interact with the other characters or the viewers.

Ideally, this is another aspect of Orange Juice in Bishop’s Garden that I really want to continually build on and unfold.

Pushing and building the interactive online-life of the show keeps things fresh and engaging. I find it’s something really vibrant, progressive and ever-changing within the storytelling world — something that a viewer can both experience and take part in and perhaps even alter the narrative by engaging with it.

As for restrains… possibly the lack of funding. I’m the writer, director, producer so, it is all very independent and we have to be very frugal.   It’s actually been a blessing in disguise because I’ve had to make something out of nothing which is a valuable skill these days. My hope is that after four seasons of Orange Juice in Bishop’s Garden, and with the web series world gaining much deserved respect, I’ll be able to find people willing to take a chance on my next project.