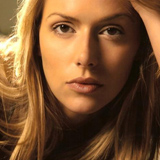 What can you tell us about your career and your audition for Bloomington?

I have a degree in Theatre, and started acting professionally in New York City doing Off-Broadway Theatre and then Television.  I will be appearing on Showtimes’: Californication next season, but prefer the medium of film.  I just finished shooting a psychological thriller titled: Five Souls due out next year.

In the final audition for Bloomington there were 3 girls that I read with (to play Jackie).  Of everyone I felt the most uncomfortable with Sarah, so much so, that I figured if she was cast- I wouldn’t be.  This is an example of where Fernanda had a clear idea of what she wanted,..and a lesson learned about personal perception.

What drew you to the role of Catherine, in this indie film, shot over 20 days?

I’m always looking to challenge myself as an actor, and -as a straight woman- Catherine forced me to explore my own sexual boundaries. I’ve also always loved the idea of being “the older woman.”  I aspire to play Mrs. Robinson someday in the West End or a Broadway revival of The Graduate. 😉

Have you ever been fascinated by a teacher ?

I’ve always been flirtatious- even in high school.  Although, I think there was an innocent irreverence on my part, as to what it “meant.”  It was all a game for me…I suppose I was quite the tease.

How did you get ready for the role? Did you watch films or read books?

Fernanda gave me a binder full of films to watch. A cross-section of “Gay Cinema” if you will.  Everything from Heavenly Creatures – which was brilliant, but so disturbing to The L-Word.

Was it hard to find a balance given that your character is a very seductive but also an extremely motherly woman?

Certain moments, and situations are suited for certain characteristics and traits to surface.  (This is true in life as well). I’ve always seen people as diamonds: multifaceted…each cut surface reflects light differently and can projecting an array of colors.

Catherine is rumored to be a vampire but isn’t she vampirised herself by her “porcupine”? How do you see the relationship she has with Jackie? Do you think that one of them takes more benefits from this relationship or that both are more mature after this love story?

I think all deeply connected experiences make you grow…it’s inevitable.

Catherine seems very cold and haughty in appearance. However, she tends to be pretty relaxed and natural when she’s with Jackie. How did you handle these two faces and which scenes did you enjoy shooting most?

That was a very deliberate act in developing the character.  I wanted Jackie to bring out Catherine’s “true nature”, their similarities as “outcasts” in their respective worlds made their time together honest and sacred.  When “being Catherine” with Jackie, I felt comfortable -at ease, and conversely “being Catherine” as the other students saw me was then like wearing a mask -theatrical.  I quite like the idea of “play”, but more thoroughly enjoyed the moments of truth.

Do you think Catherine is more immature than Jackie? Why is Jackie different from all the young students Catherine has been dating so far?

Jackie and Catherine share a perspective.  They are both “outsiders”, and therefore ‘of the same tribe’.  Catherine’s previous conquests were beneath her…jackie is an equal.

How do you imagine Catherine’s future? Is she doomed to be left over and over again by her young lovers?

I believe Catherine is setting out on a journey of self-discovery.  I doubt there will be any “young lovers” in the near future.  The previous lovers she took were “band-aids” if you will, helping her to create and control a world where she was “strong, powerful” etc.  The “real” Catherine was always hiding.  A broken traumatized loner, who felt ostracized from her peers. Jackie helped to expose the truth in both their characters, by letting in “light” via love into Catherine’s world.

Is it the first time you’re playing a lesbian? Were you hard to convince and did you have any worries? Or is it a bonus for a career in L.A?

I’ve played a lesbian on stage twice (Fefu and her Friends, and Blue Window), but there is an intimacy in film that I was afraid of at first.   I wasn’t sure I’d actually be able to find another woman attractive (genuinely) and the camera can see “untruths” so this was an initial concern for me.  Immersing myself in the character made this a non-issue.  I don’t think the sexuality of a character affects one’s career negatively or positively, in LA- or in any professional forum.

What are your best and your worst memories during the shooting of Bloomington?

Truthfully I have no bad memories of the experience @ all.  It was a wonderful project, with an amazing group of talented artists.  I feel blessed to have been a part of it.

Do you realize that you’re helping building a fraud here?

Well, honestly- the biggest part of “the fraud” is both Jackie and Catherine appearing in the same ‘frame’.
I am quite tall (5’10”) and Sarah is quite short (guessing 5’2″).  It was a very strange feeling leaning in to kiss someone so small, she seemed like a child and it made me feel like a pedophile…so, to close the height gap: she wore heels, and stood on “apple-boxes” the entire film.  Her “wrap gift” was actually an apple-box with her name carved into it, signed by all the cast and crew. 😉 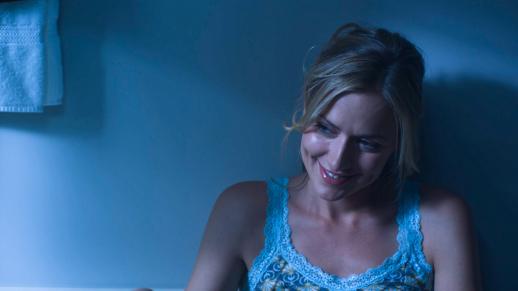 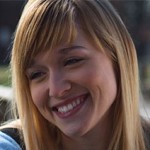 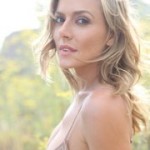 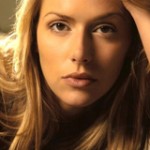 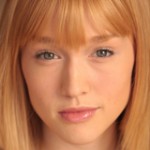